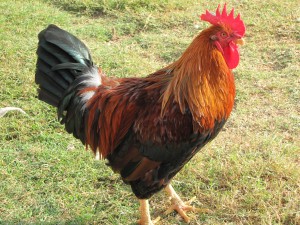 Sammy is an absolutely beautiful rooster!  The striking colors in his orange head with bright red comb is exceeded only by the lush green of his long tail feathers.  Sammy looks like a perfect living picture of a rooster stepping right out of the pages of a children’s story book.

We acquired Sammy when he was a tiny chick, along with eleven other chicks.  We’re not poultry farmers and don’t know much about raising chickens, different breeds, and all that.  Sammy and his cousins are all pets acquired at the local farm store for the benefit of our 10-year-old son, who loves animals of all shapes and sizes.

Although I don’t know Sammy’s breed, I call him a game cock.  To me, the use of this term has become more of a character description than a specifically defined chicken ancestry.

Of the original twelve chicks, only two have survived, Sammy and one hen.  The other ten hens made it to young adulthood, just to be killed by an owl, one night.  Needless to say, that was a rather traumatic event for us to wake up to, which we now refer to as The Great Chicken Massacre.  We had nine dead chickens in our pen, and one missing.  The missing hen carcass was later found, mostly devoured, atop a round-bale of hay.  Since then, a large horned owl has been seen several times, preying on wild rabbits near our farm, and we assume he is the culprit.

The two surviving chickens acted very traumatized for weeks afterwards.  As sunset faded to twilight, both would head straight to the chicken coop and refuse to come out.  The hen was unharmed, but Sammy was missing all of this tail feathers, as well as large clumps of feathers near the back of his neck.  It was clear that Sammy had battled the owl and survived to tell the tale!

Now, the interesting thing to me has been watching the impact of this life-changing event on Sammy’s character.  Sammy was a very young rooster at the time of The Great Chicken Massacre.  Prior to that event, he had been somewhat of a bully.  He would chase the other chickens around, for no reason, other than the joy of showing his size and strength.  At feeding time, Sammy would chase the hens away from the food, spill the food out on the ground, and scratch dirt over it.  When we started feeding in two places across the yard from each other, Sammy would run back and forth trying to keep anyone else from enjoying the food until after he had desecrated it.

Since The Great Chicken Massacre, however, Sammy has matured.  He has become the protector of the farm fowl.  Since that time, Sammy’s flock has grown, as we have added three ducks and one goose to our collection of barnyard fowl, and Sammy has taken it upon himself to act as protector and provider for all, watching over his little flock with great protectiveness.

The owl has returned on several occasions, and each time has been successfully repelled by Sammy.  We know this, not by any further loss of fowl life, but by Sammy’s missing feathers (in the photograph his tail is still short from the last owl attack).  We’ll come out in the morning to find Sammy’s feathers have been plucked again, but all the other fowl are perfectly fine, other than a little jumpier than usual.

Sammy is a good-sized chicken, but the owl’s size dwarfs Sammy!  That rooster is only a fraction of the size of the owl he is fighting.  Yet, he has consistently driven the owl off, while protecting the rest of the flock.  That’s amazing!

Here in the South, we have a term for that sort of behavior.  We call it game.  Game is an adjective used to describe a character trait of persistent courage in the face of adversity. For example, when a kid gets thrown off a horse multiple times, and each time climbs right back on, an observer will note, “Boy, he’s game!”

Sammy is game!  No matter the size of his adversary, no matter how many times he gets knocked down, no matter the personal risk of injury or death, he keeps getting back up and keeps fighting off all potential threats to his little flock!

As you can tell, I have come to have a great deal of admiration for Sammy!  I can relate to his protective nature, and I greatly admire his spirited courage in the face of adversity.

Sherri and the boys, however, have developed a deep dislike for Sammy.  See, Sammy is a bit over protective and very cocky.  He struts around fluffing his feathers and watching for potential enemies.  The problem is that anyone who is not a part of his little flock is viewed as a potential enemy.  It doesn’t matter that we feed  and water him every day, and care for all his needs.  We are outsiders and, therefore, a potential threat, and he treats us accordingly.

When we walk up to the chicken yard fence, Sammy comes running, with feathers puffed out to appear large and threatening.  Step inside the fence, and he starts running sideways at you.  Make one advance toward Sammy or one of his protectees, and Sammy will fly at you with slashing spurs!

Granted, Sammy is just a chicken and only weighs a few pounds.  Granted the only harm he can really inflict is a few scratches on bare arms or legs.  Still, he is very intimidating!

Even I carry a rake with me when I gather eggs or mend chicken fences.  Even I get a little jumpy anytime I have to turn my back to Sammy, knowing at any moment he could fly at me.  For Sherri and the boys, who are smaller than me, it’s completely unnerving.  They see Sammy as nothing but a menace…a big, cocky bully!

And they’re right, Sammy is a bit of a bully and he is cocky!  But then, what else should we expect?  After all he is a cock.  Shouldn’t we expect a cock to act cocky?  And yes, Sammy is persistently pesky, refusing to back down no matter what, but isn’t that the same game nature I’ve come to admire in him when defending the flock against owls?

Regardless of his ancestry or breeding, Sammy is the living personification of a game cock!

When we’re tired and grumpy, or feeling a little guilty about things left undone, a spouse’s “helpful reminders” become interpreted as “nagging.”  My quirky sense of humor may, at times, be enjoyed as a great positive trait, but interjected at the wrong time comes across as immature or inappropriate.  Someone who is great at problem solving may come across us unsympathetic or harsh when presented with an emotionally charged issue.  An adolescent’s great good humor and spontaneity becomes irresponsibility when it results in lost items and missed deadlines.

When Sherri and the boys get frustrated at Sammy’s cocky bullying and start mumbling about chicken and dumplings, I am quick to remind them how game he is, and what a great protector of the flock.

I am working on training myself to do the same with people.  When I start getting frustrated at something I perceive as a negative trait, it helps to stop and ask myself under what circumstances I see that same trait as a positive characteristic.  It’s amazing how much difference it can have on both my own attitude and my interaction with others.

Rather than being critical about a negative, I can be encouraging about a positive.  Rather than trying to change the person into something they are not, I can encourage them to use their God-given strengths in a more effective and positive manner.

I’m still working on it…

How about you?  What frustrating character traits in those around you are actually good traits under other circumstances?  How can you encourage them to use their strengths more effectively?  How can you learn to “dwell on these things” rather than the frustrating aspects of the same trait?