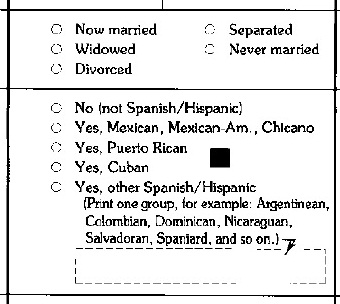 When completing a census form or a job application, we’re often asked our marital status, and given choices of Single, Married, Divorced or Widowed. An individual who experienced divorce many years ago, and has not married again, feels compelled to label themselves, “Divorced.”

Too often, within the church, we add yet another marital status, “Divorced and Remarried.”

This stigmatic label is never removed no matter what further life accomplishments may be achieved, or how successful and enriching a later marriage may become.

What’s in a name?

From a biblical perspective, our covenant relationships define who we are.

When God made a covenant with Abram, Abram received a new name, Abraham (Genesis 17:1-5). Likewise Sarai received a new name, Sarah (Genesis 17:15). The new names signify that Abraham and Sarah are no longer the same people they were prior to the covenant. They now have a covenant partner, and that covenant relationship has redefined who they are. Their identities have been changed.

Even today, when a man and woman are married, it is customary for the woman to take her husband’s last name as her own, signifying that her identity has changed, with a new character trait defined by her new covenant relationship.

In biblical language, we seldom read a sentence starting with “I am…” followed by anything temporary or transitory. “I am…” statements are almost invariably followed by a defining characteristic of that person, or by reference to a covenant relationship, such as “I am the Bread of Life” (John 6:35) or “I am the Light of the World” (John 8:12).

In contrast, consider Jesus’ statement on the cross, “I thirst” (John 19:28 NKJV). Note that He did not say, “I am thirsty,” as would be typical today. The state of thirst was temporary and did not define who Jesus is.

My identity cannot be defined by a covenant that does not exist:

Divorce does not define who I am, as implied by a statement such as, “I am divorced.”  Divorce is an experience I have been through, not a defining characteristic of my identity.

Likewise, divorce is not a perpetual state of being. I have been through divorce; I am not in divorce.

Saying I am divorced would be like saying Jesus is dead. Jesus died, but He is not dead. Death is an experience He passed through before emerging very much alive, on the other side.

Likewise, divorce is an experience I have passed through, before emerging very much redeemed from that covenant, on the other side. I went through a divorce, but I am not divorced. Divorce is not a state in which I continue to live.

When we define ourselves as “divorced,” we limit our potential, hanging onto old wounds and failed relationships. There are not multiple marital statuses! We are either married or single. I am either in a marriage covenant or not in a marriage covenant. Once a covenant has ended, that covenant no longer exists and ceases to define who I am.

When we refer to Christian brothers and sisters who have experienced a failed marriage as “divorced” or “divorced and remarried,” we are labeling them by what is commonly (though erroneously) believed to be sin. We are affixing a label of “sinner” and “untrustworthy” that is never removed and never lived down.

This is completely contrary to Christ, the Christian faith, and all that Christ did on the cross!  Even if sin was involved (which is not necessarily the case) why would we continue to characterize a person by their past sin?

God does not see me as “divorced,” nor as “divorced and remarried.”  He sees me as possessing the valuable life experience of having lived through a divorce, and He intends for that life experience to become a useful tool in the ministry for which He has ordained and destined me.

What valuable life experience has God used to shape your ministry?

[Note: This post includes excerpts from my book titled, So You are a Believer Who has been through Divorce: A Myth-Busting Biblical Perspective on Divorce]