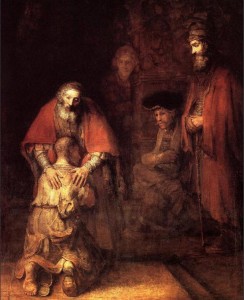 This is a good definition of forgive, as we generally understand and use the term in everyday language.  But what happens when we try to apply the same definition to God’s forgiveness?

I’ve heard a lot of sermons on unconfessed sin that would lead one to believe God is angry and resentful toward us so long as we have any unconfessed sin in our lives.  Thinking of God’s forgiveness in these terms leads toward a perception of God as a harsh taskmaster looking for any excuse to punish us.  Yet the overwhelming evidence of scripture is that God’s position toward us is one of incredible love and grace.

The Apostle Paul describes God as looking for opportunity to demonstrate His love toward us, even when we are breaking His laws and allied with His enemy, not as looking for an excuse to punish us!  Yes, God’s wrath will judge the kingdom of darkness, but God’s position toward us is one of working to rescue us from the kingdom of darkness before it is destroyed, much as Lot and his family were rescued before the destruction of Sodom and Gomorrah.

THE SPIRIT OF THE LORD IS UPON ME, BECAUSE HE ANOINTED ME TO PREACH THE GOSPEL TO THE POOR. HE HAS SENT ME TO PROCLAIM RELEASE TO THE CAPTIVES, AND RECOVERY OF SIGHT TO THE BLIND, TO SET FREE THOSE WHO ARE OPPRESSED, TO PROCLAIM THE FAVORABLE YEAR OF THE LORD.

Jesus came to give us aphesis (deliverance) from sin.  When the Bible speaks of God forgiving our sins, this is what it means, that He will deliver us from sin.  God is not harboring anger and resentment toward us until we confess our sins.  Rather, He is actively working on our behalf to draw us to close Himself, so we can be delivered from our addiction to sin.

Knowing this, when we become aware of sin in our lives, we should run to Him for help, rather than avoiding Him in guilt and fear.  He has made himself available to us as our healer rather than our punisher.