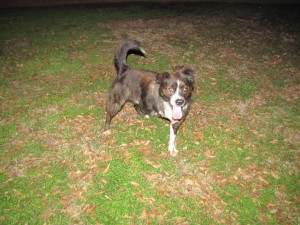 Forget the former things; do not dwell on the past. See, I am doing a new thing! Now it springs up; do you not perceive it? I am making a way in the wilderness and streams in the wasteland. (Isaiah 43:18-19)

Of all our dogs, John is the one who most loves to play fetch.  It is a game that he simply never tires of.  As soon as I step out the door, there is John with a ball, a stick, or just an old hunk of leather, dropping it at my feet and begging to play.  No matter how many times I throw, John will always bring it back for another round.

I’ve often referred to John as our canine athlete.  Not only does he love to play, but he also is very fast and agile, and acts annoyed when other dogs try to join the game.

John understands the goal and goes all out to not only retrieve the thrown object, but to attempt to catch it in the air. When the other dogs try to play, they mostly follow John, getting in the way by snapping at him and trying to get the ball away after he has already retrieved it.  Watching them together is like watching a professional athlete attempting to play a serious game with a group of neighborhood guys who lack both the skill and the knowledge.

A few weeks ago, John got into a bad fight with two dogs who were each well over twice his size.  Hearing the fight, I ran to the scene in time to save John’s life…just barely.  Although I honestly did not expect John to survive the ordeal, we rushed him to the vet to see if he could be saved.

It was with very mixed emotions that we received the news from the vet that John would likely live, but that his right front leg required amputation. Recalling John’s athletic nature and love for running and playing, we wondered whether he would ever again be able to really enjoy life.

We visited John, daily, during the weeks he was at the vet.  As we walked into the kennel room, John would raise his head and wag his tail, in joyous greeting, then look sad and depressed as we said goodbye.

As his strength improved, we would let John out of the kennel for our visits.  Limping straight to the door, John would sit and beg to be let out.  Although happy to see us, overall John was depressed and hated staying indoors.  He longed to run and play again!

Now, John is back home, and his wounds are almost healed.  He’s back to his usual boisterous personality and never-ending pursuit of games!

Minus one leg, John is not quite as fast or agile as he once was, and he sometimes looses his balance and falls.  The other dogs can sometimes beat him to the ball, now, whereas before they never did.

None of that seems to bother John, one bit!

As far as I can tell, John never wastes one second grieving the loss of his leg, reminiscing about how fast he used to be, or comparing present circumstances to how things “should be.”  John doesn’t appear to ever compare himself to the other dogs or to his own past abilities.  He never complains about the unfairness of life.  Beyond an occasional yelp when he falls, John never even complains about the pain of his still healing wounds.

John is so happy to once again be free to run and play, that nothing else matters to him.  He simply lives life to its fullest, accepting circumstances for what they are.

I have read that losing a loved one is much like losing a limb; you will heal, but you will never be the same.  Although I’ve never lost a limb, I have experienced enough sorrow to attest to the truth of this statement.  Healing does come, but life is never the same.

Watching John play and seeing his enthusiasm for life, I realize there is much I can learn from this canine athlete.

While convalescing at the vet, John grieved.  Beyond a raised head and wagged tail of greeting, he made no attempt to disguise his misery.  Once healed enough to return home and get around a bit, he never looked back.  He simply accepted the current circumstances for what they are and pressed on to enjoying life.

Realizing that a dog’s emotions are certainly much less complicated than human emotions, I still have to admire John and seek to learn from his example.

Therefore, since we have so great a cloud of witnesses surrounding us, let us also lay aside every encumbrance and the sin which so easily entangles us, and let us run with endurance the race that is set before us, fixing our eyes on Jesus, the author and perfecter of faith, who for the joy set before Him endured the cross, despising the shame, and has sat down at the right hand of the throne of God. (Hebrews 12:1-2)

What can you learn from John’s example?