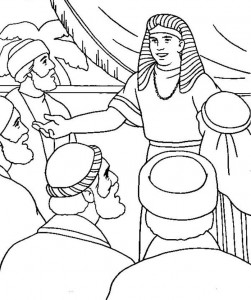 What you intended for evil, God has used for good.

Then Joseph said to his brothers, “Please come closer to me.” And they came closer. And he said, “I am your brother Joseph, whom you sold into Egypt. Now do not be grieved or angry with yourselves, because you sold me here, for God sent me before you to preserve life. For the famine has been in the land these two years, and there are still five years in which there will be neither plowing nor harvesting. God sent me before you to preserve for you a remnant in the earth, and to keep you alive by a great deliverance. Now, therefore, it was not you who sent me here, but God; and He has made me a father to Pharaoh and lord of all his household and ruler over all the land of Egypt. (Genesis 45:4-8)

What a powerful story of forgiveness and reconciliation!

A couple of weeks ago, I wrote a post titled, Forgiveness with Boundaries, about David’s relationship with Saul.  In that post I pointed out that, although David clearly forgave Saul, reconciliation was not possible because of Saul’s proven untrustworthiness.

The story of Joseph and his brothers, however, turns out quite differently!

Joseph’s brothers committed a horrible crime against Joseph.  They threw him into a pit with plans to leave him to die, then decided to sell him into slavery, instead.

Through a series of trials and the grace of God, Joseph eventually became ruler over all the land of Egypt, second only to Pharaoh.  When famine struck, Joseph’s brothers came to Egypt to buy food, not knowing that Joseph was in charge of food distribution.

The story culminates in the scene quoted above, where Joseph reveals himself to his brothers, declaring his forgiveness, and the family is reunited.

So, let’s look at some of the things Joseph did and did not do, that resulted in this outcome of reconciliation after such a horrific crime:

The primary difference in outcome between the story of David and Saul and the story of Joseph and his brothers lies in the position of the perpetrators.  Joseph’s brothers truly repented of their crime, changing both their hearts and their actions over a period of several years.  Whereas Saul’s behavior clearly demonstrated that he had not truly repented and could not be trusted, although expressing words of repentance.

In dealing with situations of deep wounds acquired in abusive relationships, we would do well to follow the examples set by both Joseph and David.

How has God used forgiveness in your life?