I must have been about twelve years old at the time.  My parents were involved in a local youth ministry called simply, The Coffee House.

I watched, attentively, as my father’s hand grasped the stick of white chalk to draw a  clean, neat circle on the chalkboard. 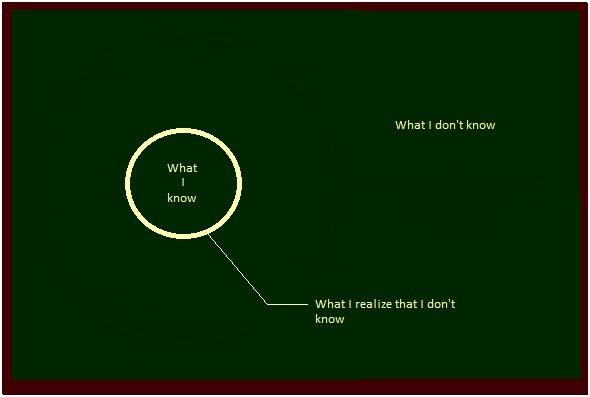 Then, pointing at the chalk circle, “The circle itself represents what I realize that I don’t know.”

Papa then drew another circle, much larger than the first, and simply stated, “As my knowledge increases, so does my awareness of how much I don’t know.” 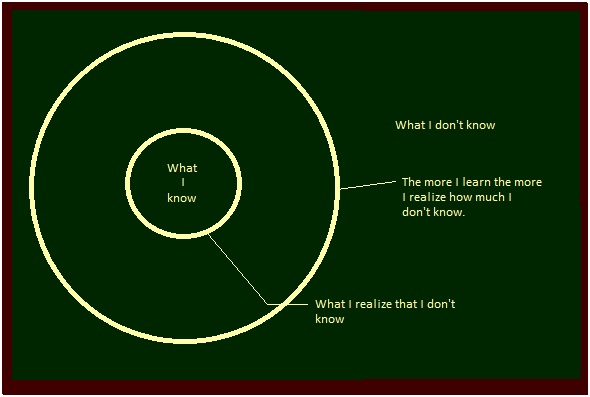 Such a simple lesson, yet so memorable!

I often recall that diagram and Papa’s words as I hear Christians defend their various positions, doctrines, and theological perspectives.

Studying God’s word and striving to understand the nature of God are good and godly pursuits.  So is sharing our perspective with others.  And, yes, we should speak with confidence of what we know and what God has shown us.  And we should be prepared to explain why we believe what we believe.

But we should also remain always teachable, always eager to learn new truths, or to see old truths from a new perspective!

Too often, I hear teachers and preachers state their views so dogmatically as to give the impression they believe they have it all figured out, and anyone who disagrees with them is either ignorant or stupid.  Too often, views of doctrine are stated with such an inflexible authoritative tone as to leave no room to hear another viewpoint expressed.  And too often, any differing viewpoints are quickly silenced rather than listened to or learned from.

When I hear those sorts of inflexible, dogmatic statements, I recall Papa’s chalk circle and think, “Wow!  You really don’t know very much, do you?”

These two things I know for certain about any person’s theology (including my own):  It is far from complete, and its view of God is far too small.

Man’s steps are ordained by the Lord,
How then can man understand his way?(Proverbs 20:24)

For I know that the Lord is great
And that our Lord is above all gods.
Whatever the Lord pleases, He does,
In heaven and in earth, in the seas and in all deeps.
He  causes the vapors to ascend from the ends of the earth;
Who makes lightnings for the rain,
Who brings forth the wind from His treasuries. (Psalm 135:5-7)

How big is your view of God?