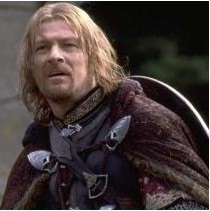 In my last post, Boromir the Abuser, we took a closer look at Boromir of Gondor, a character from J.R.R. Tolkien’s The Lord of the Rings trilogy.  We discussed how Boromir’s status as a mighty warrior and hero of Gondor does nothing to lessen the fact that, to Frodo the Hobbit, he was a traitor.

My sister, Dorcas, director of The Dorcas House, a women and children’s shelter in Little Rock, Arkansas, posted a comment that I found very insightful, and would like to explore further.

At the point in Tolkien’s story where Boromir attemped to take the Ring of Power from Frodo, by force, Frodo slipped the ring on his finger, for invisibility, and ran away.  Boromir first reacted with anger, screaming threats and accusations.  Then, he tripped, fell, lay still for a while, and began to weep.

He rose and passed his hands over his eyes, dashing away the tears, ‘What have I said?’ he cried. ‘What have I done? Frodo, Frodo!’ he called. ‘Come back! A madness took me, but it has passed. Come back!’

Boromir sounds very remorseful, doesn’t he?  And he, apparently, does feel true remorse.  He realizes he has done an awful thing, and is repulsed by his own actions.

Later that same day, Boromir was mortally wounded in battle, defending the other hobbits, Merry and Pippin.  With his final words, Boromir confessed his treachery of Frodo, to Aragorn.  The combination of Boromir’s courageous sacrifice and confession indicate signs of true repentance, at some level.

But let’s read his last words to Frodo, again:

I missed it, until Dorcas pointed it out.  Even though Boromir is weeping for what he has done, he is still calling for Frodo to come back!  He is justifying what he did as a temporary madness that won’t happen again, while pleading with Frodo to place himself at risk again.

Yet, as readers, we know that’s not true!  No matter how uncharacteristic Boromir’s treachery may appear, lust for the power of the ring has taken root and corrupted his heart.  Given the chance, he would escalate the abusive treachery in an attempt to claim the ring as his own.

Boromir has recognized neither the extent of his own weakness nor the depth of harm resulting from his treachery.  His very pleading with Frodo to “Come back!” demonstrates that he is still minimizing his own sin and has not fully repented.

Contrast Boromir’s plea with Gandalf’s words when Frodo asked him to take the ring:

‘No!’ cried Gandalf, springing to his feet. ‘With that power I should have power too great and terrible. And over me the Ring would gain a power still greater and more deadly.’ His eyes flashed and his face was lit as by a fire within. ‘Do not tempt me! For I do not wish to become like the Dark Lord himself. Yet the way of the Ring to my heart is by pity, pity for weakness and the desire of strength to do good. Do not tempt me! I dare not take it, not even to keep it safe, unused. The wish to wield it would be too great for my strength. I shall have such need of it. Great perils lie before me.’

Gandalf was trustworthy precisely because he understood both his own weakness and the full cost of giving in to temptation.  The fact that Gandalf did not trust himself to even touch the ring is what made him worthy of Frodo’s trust.

Boromir’s pleas to Frodo clearly show that, although he had already betrayed Frodo once, he still failed to recognize the extent of his weakness and the cost of his treachery.  If Boromir had truly understood his own weakness, and had truly repented, he would never have encouraged Frodo to return to him.

Here is what Gandalf said, later, when speaking of Boromir:

Poor Boromir! I could not see what happened to him. It was a sore trial for such a man: a warrior, and a lord of men. Galadriel told me that he was in peril. But he escaped in the end. I am glad. It was not in vain that the young hobbits came with us, if only for Boromir’s sake.

Boromir escaped.  Escaped what?  Certainly not death nor the breaking of fellowship with Frodo.  No, Boromir escaped the evil power of the ring.  Frodo’s flight with no return, and the peril of Merry and Pippin, were interventions of grace on Boromir’s behalf, resulting in his freedom from the ring’s evil power.

It’s interesting that even as he wept over what he had done he begged Frodo to come back.  If he truly understood his own weakness, he would never have encouraged Frodo to return to him.

Abusers are always “sorry” right after the abuse, and I think that at some level they believe they’ve changed but have no insight into the depth of what they have done.

I remember a client who had been severely abused for years and came to the Dorcas House fleeing for her life. Eventually her grown children convinced her that her husband had changed and talked her into “trying it again,” though I begged her not to.  As you can imagine the abuse and control were exponentially worse.  Her escaping again took extreme measures on her part, and it was a miracle she lived.

After she had been with us for a while again, her abuser wrote her expressing his remorse.  He said that he was in church now, a man of God, and wanted them to serve God together.  I remember that for some reason she and I were sitting on the floor in the front hallway as I read the letter.  Afterward I asked her, “What could he say that would convince you he has changed?” I have no idea why I asked her that, but her answer was profound. She said, “If he ever said, ‘Don’t ever come back to me because I cannot be trusted.’  And I would believe him and never go back.” To my knowledge she never did.

So often, friends and family see an abuser’s expression of remorse, and feel compassion at his passionate pleas for reconciliation.  Too often, they intervene on behalf of the abuser, asking the abused spouse to reconcile.  What they fail to understand is that when an habitual abuser is pleading for reconciliation and acting as though their happiness is dependent on that relationship, that behavior and mindset is, itself, evidence that they are not trustworthy.

The very fact that they view the relationship as essential to their happiness demonstrates that their motives are still selfish, and their expectations are still unrealistic.  The very fact that they are convinced of their own trustworthiness, despite their repeated treacheries, demonstrates that they have not recognized the depth of their own weakness and, therefore, cannot be trusted.