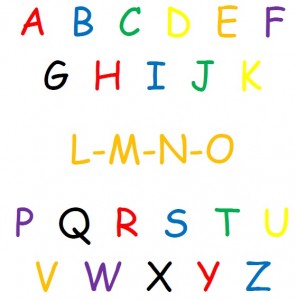 It’s hard to believe he’s a grown man, now.  It seems like yesterday this strong young man was a child taking in the world with wide-eyed wonder.

I recall one day, when he was five years old, watching him recline on the living-room carpet reading a children’s book.  He was an early reader…quick to learn new things.  He learned the alphabet song when he was two and learned all the letters and phonetic sounds by four years old.  At age five, he could already read many of our children’s story books.

I listened with pride as he read the story out loud.  Then watched as he flipped the page to the inside back cover where the alphabet was printed in bold primary colors.  He started singing the alphabet song while pointing to each letter, “A, B, C, D, E, F, G…” he sang with confidence, pointing out the next letter with each new note.

I watched with curiosity as he approached the letter L, wondering how he would handle that portion of the song.  Sure enough…he stumbled…

Pointing to the letter L he started to sing “L-M-N-O” then caught himself with a look of confusion.  His confusion grew as he made a couple more attempts at trying to figure out where the letter L-M-N-O fit in the alphabet.  Finally, he started over at the beginning, worked his way down to L and got stuck, again.

With a look of utter bewilderment he looked up at me.  “Daddy…” he started.  “I know,” I interrupted, “It can be confusing.  You’re doing good.  Keep trying and you’ll figure it out.”

So he tried again, from the beginning.  Again, he got stuck at L and looked up at me.  “Start again at H and sing very, very slowly,” I suggested.

And yet…that was such a moment of excitement at fresh insight into how it all fits together!  Suddenly, the alphabet song, which he’d known as long as he could remember, made more sense!  It now fit with other things he knew and accepted as being true.

I think those moments are my favorite part of learning.  I absolutely love moments of epiphany where I suddenly have fresh insight into how things fit together.  Rarely is it really anything novel in and of itself.  Each component was something I had previously studied and pondered.  But that flash of insight realizing how it fits…truly joyous!

Have you ever had a flash of insight into how things fit together?