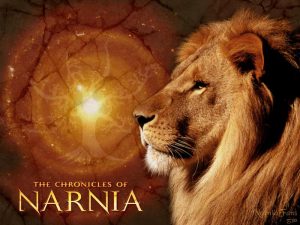 In rereading C.S. Lewis’ The Chronicles of Narnia, I’ve been fascinated by Lewis’ portrayal of how Aslan’s will is worked out in Narnia.

In the Narnian creation portrayed in The Magician’s Nephew, Aslan literally sings creation into being.  Aslan’s will is worked out through his own voice with changes in melody and rhythm preceding changes in the appearance of newly created beings.  The creation scene is portrayed as a beautiful symphony of creative expression of Aslan’s will.

Similarly, in the biblical Genesis account we see the earth’s creation spoken into existence through a series of “Let there be…” imperatives from God, the Creator. Then at the start of his gospel account, John, speaking of Jesus as The Word, said:

Reading these two biblical accounts I sense a joyful creative expression of God’s will, similar to that described in Lewis’ fictional portrayal.

On the day of the Narnian creation, Aslan also instated a Son of Adam and a Daughter of Eve as the first king and queen of Narnia. From that point on, we see a very different approach to Aslan’s will being carried out.  Once mankind is established as rulers over Narnia, Aslan begins working out his will primarily through humans or in response to the prayers of humans.

Even on the first day of creation, Aslan sent Digory and Polly on a quest to retrieve an apple to be planted by Digory to protect Narnia from evil. Aslan could have simply sung the protective apple tree into creation, himself.  Instead he saw fit to assign that task to Digory.

We see this same pattern in the biblical record. Prior to creating Adam, God carried out His will directly through His Word.  After instructing Adam and Eve to rule over the earth, His will was carried out on earth primarily through mankind…through His children…and through their prayers.

In Prince Caspian, both Cornelius (Caspian’s tutor) and Glenstorm (the centaur who was also a prophet) repeatedly referred to signs in the heavenly bodies indicating that the time had come for a major positive change in Narnia.  These signs and prophecies clearly indicate a predestined will of Aslan for Narnia to be freed from the oppressive rule of Miraz and for Caspian to be crowned as king over all Narnians.

However, supernatural help was withheld until Caspian blew Queen Susan’s horn…the magical horn given to Susan in The Lion, The Witch and The Wardrobe that was promised to always bring help in time of need.  When Caspian blew the horn, his cry for help (prayer) called the four children from their world and ushered Aslan’s return.  Clearly, Aslan’s will was being worked out throughout the story.  Yet, his active participation awaited Caspian’s plea for help and was largely enacted through his servants, the Pevensie children.

At the beginning of the quest, Aslan explained their task to Jill.

“The task for which I called you and him here out of your own world.”

This puzzled Jill very much…

“I was wondering – I mean – could there be a mistake? Because nobody called me and Scrubb, you know.  It was we who asked to come here.  Scrubb said we were to call to – to Somebody – it was a name I wouldn’t know – and perhaps the Somebody would let us in.  And we did, and then we found the door open.”

“You would not have called to me unless I had been calling to you,” said the Lion.

So, we see this intermingling of Aslan’s will with human will. Aslan’s sovereign will is carried out through the stammered prayers and flawed actions of humans.  Yet His will supersedes and orchestrates their wills.  Were it not for Aslan’s involvement, the quest would surely have failed through the many errors of the humans.  And they would never have even prayed their stammered prayer had He not called them…and even in their prayer they did not know even a fraction of what they were asking for.  Yet Aslan orchestrated His perfect will to be carried out through their imperfect pleas and choices…without ever violating or forcing their wills.

There are numerous biblical examples of God’s will being carried out through His people. One example is the Great Exodus from Egypt.

Know for certain that your descendants will be strangers in a land that is not theirs, where they will be enslaved and oppressed four hundred years. But I will also judge the nation whom they will serve, and afterward they will come out with many possessions.

So Israel’s slavery in Egypt and their Exodus was all part of God’s preordained plan, foretold to their ancestor, Abraham, hundreds of years in advance.

The book of Exodus opens by telling us a new Pharoah arose who did not know Joseph…was not faithful to his covenant with Joseph’s descendants.  The new Pharaoh enslaved the Israelites, forced them to hard labor, and killed their newborn sons.

Then we are told:

The Israelites prayed to God, and God was faithful to His covenant with them.

As the story unfolds, we see that God worked through Moses to redeem and deliver the Israelites from their bondage to Pharaoh.

So, God’s redemption and deliverance of Israel was in response to their prayer and was enacted through Moses. Yet, it was all part of His perfect pre-ordained plan given to Abraham hundreds of years earlier.

Just as in C.S. Lewis’ fictional tales of Narnia, God works out His perfect will through the imperfect prayers and flawed choices of His people.

Do you sometimes feel as though you are unimportant? As though your contributions to the world are insignificant?  As though you make too many mistakes to be of any heavenly good?

If you are God’s child then you are His chosen vessel through whom He works His will and purpose in this world. Click To Tweet

That’s how God’s will gets done in this world…through us…through our prayers and our actions.

But you are a chosen race, a royal priesthood, a holy nation, a people for God’s own possession, so that you may proclaim the excellencies of Him who has called you out of darkness into His marvelous light; (1 Peter 2:9).

Be who God has created you to be…and trust Him to work His perfect will and purpose through you.