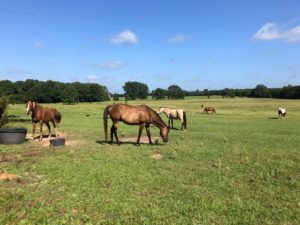 The Morning View from My Front Porch

It is a beautiful mid-July Saturday morning in south Arkansas!  The sun is bright.  The grass is green. The dew is still on the grass. A cool refreshing breeze stirs the leaf-covered tree limbs, and the oppressive heat has not yet set in for the day.

This week has been a series of peaceful early morning rides before work. Knockout and I have ridden out in the cool dawn hours to check cows before the sweltering daily heat sets in…and before I have to leave for work.

Knockout has been super calm and responsive with everything I’ve asked of him.  The cattle have all been calm and sleepily serene.  All has been quiet and peaceful.

This morning was different, though…

This morning, Knockout was reluctant and distracted from the start.   He balked as I led him out of the pasture, so we took a few minutes to regain his attention.

Coming through the pasture gate, Knockout was distracted and spooky. So we spent a few more minutes focusing attention.

Then our dog started barking and Knockout totally spooked sideways at what turned out to be a stray cat hiding in our fence line.

As I groomed, saddled and mounted, Knockout seemed calm. We rode out to check cattle and all was going peacefully until a group of calves spooked and loudly ran up into the middle of the herd. That caused Knockout some concern, but I convinced him to calmly continue walking forward as the calves rushed around and past us.

With a bawling running herd of cattle on our heels, Knockout was quite nervous, but we walked (on a loose rein) through the gate and down to the nearby creek. As we crossed the creek, cows surged up behind us from both sides, and Knockout bounded up the creek bank just ahead of them.  Safely across the creek, I guided Knockout to the side, where I turned him to stand and watch the cattle file past us, as they slowed to a single-file procession and began grazing.

Once all the cattle were accounted for, we checked fence and repaired a loose wire before returning to the arena, where we walked a couple of barrel patterns on a loose rein before calling it good for the day.

As I unsaddled, I realized how my expectations in a horse have changed.  I used to think the perfect horse was one that would never spook at anything and would remain calm no matter what happened.

Now, I expect a horse to sometimes get disturbed at stuff. What I want is for him to still listen to me even when he’s disturbed.

This morning’s ride was every bit as enjoyable to me as the preceding uneventful rides.  Knockout’s distress at unexpected events was not a setback.  It was just an event to be handled…and he handled it well…listening to me and following my cues.

Isn’t that how our relationship should be with God?

Throughout scripture, angels, prophets, and apostles frequently encourage God’s people to not be afraid.  Jesus, Himself, told us:

For this reason I say to you, do not worry about your life, as to what you will eat; nor for your body, as to what you will put on. For life is more than food, and the body more than clothing. Consider the ravens, for they neither sow nor reap; they have no storeroom nor barn, and yet God feeds them; how much more valuable you are than the birds! And which of you by worrying can add a single hour to his life’s span? If then you cannot do even a very little thing, why do you worry about other matters? Consider the lilies, how they grow: they neither toil nor spin; but I tell you, not even Solomon in all his glory clothed himself like one of these. But if God so clothes the grass in the field, which is alive today and tomorrow is thrown into the furnace, how much more will He clothe you? You men of little faith! And do not seek what you will eat and what you will drink, and do not keep worrying. For all these things the nations of the world eagerly seek; but your Father knows that you need these things. But seek His kingdom, and these things will be added to you. Do not be afraid, little flock, for your Father has chosen gladly to give you the kingdom. (Luke 12:22-32)

I’ve heard some people label worry and fear as sinful… an obvious lack of faith.  I’ve heard people label as commandments the many scriptural calls to not be afraid.  I have even heard pastors preach against using anxiety medications, saying people just need to trust God and have faith.

I don’t read these passages that way at all!

I see these calls to not be afraid, not as commandments, but rather as encouragement… much as I tell Knockout, “easy boy” when he acts distressed.  I don’t get angry with Knockout for being afraid.  Rather I seek to encourage and comfort him in his fear.

See, what I’m doing is helping Knockout remember to listen to me in the midst of his distress… and as he listens to me and responds to my cues, he becomes less distressed.

I don’t look at Knockout’s fear as a failure on his part.  I look at it as an opportunity for us to work on clear communication and direction during his distress.

I believe the same is true of my relationship with God.  He doesn’t expect me to never be distressed.  He simply wants me to listen to Him and follow His prompts in the midst of my distress.

After all, He is the Master Horseman!