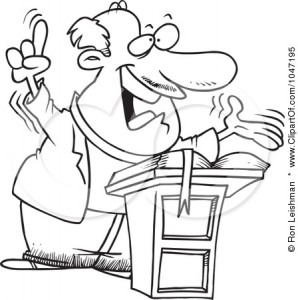 If I hear another sermon or newsletter quoting divorce statistics and repercussions of divorce, I may just puke!

This has been a growing pet peeve for some time, and in the last two weeks I have heard one sermon, received one newsletter, and one e-newsletter quoting divorce statistics.  I walked out of the sermon half-way through, not because I was angry, but simply because I realized by then that there was no benefit to staying, and my time was better spent doing other things.  I threw the newsletter away, then dug it back out of the trash to quote in a blog-post, then thought better of it, because it was from a group for whom I actually have a great deal of respect and don’t want to publicly disparage on the basis of one poorly written bulletin.

Here’s the thing.  First of all, any statistics quoted without the background information of where the data comes from and how the study was conducted are simply being taken out of context, and have no meaning.  When I hear someone say that 50% of all marriages in America end in divorce, I immediately wonder where that information came from, and what time period it covers.

You get the idea.  Without this contextual information the statistic is completely meaningless.  Presented in a publication with all the background data, it might be of interest to me, and might be useful in targeting a specific need to address in ministry.  However, presented in a sermon, without the contextual information, it is meaningless jargon with no relevance.

Thirdly, sermons quoting divorce statistics come across as just incredibly naive!  Who, exactly, is intended to receive this information and how, exactly, are they expected to respond?

People who believe their marriage to be on solid ground aren’t paying attention, other than to nod their heads and reflect on how bad society is and how fortunate they are.

People whose marriage is in grave danger already know that, and are either working to save it or have already given up on it.  Either way, quoting statistics to them is not going to change the situation.  Do you really think they’re going to say, “Oh, wow!  If I’d realized that I would have worked harder on building a stronger marriage”?  Not likely!  Either they are already doing everything within their power, or they have already decided the marriage is no longer worth the effort.

And what about all the people who have already experienced divorce?  If the statistic being quoted is to be believed and accepted at face value, the implication is that half the congregation has experienced divorce.  What benefit is it to them to quote statistics, or to tell them how painful divorce is?  Honestly, to this audience, the speaker is an amateur showing his ignorance by pretending to be an expert in front of a crowd of seasoned veterans.  Nobody knows divorce like someone who has personally experienced it!

One recent article referred to divorce as “a preventable tragedy if there ever was one.”  While I understand that for someone who has never experienced it, this may appear to be a valid statement, it is an incredibly simplistic and naive viewpoint.  Certainly, most divorces would be preventable if both partners were committed to working at improving their marriage, with expert counseling.  However, if that were the case, they would probably not be in danger of divorce to begin with.  If one partner is not committed to the relationship, there is absolutely nothing the other partner can do to improve the relationship or to prevent divorce; for them it is a completely unpreventable tragedy!  Moreover, many couples do not have access to professional counseling.  If divorce were so easily prevented, it would not be so common.

Fourth, I’m not real sure whether an increase in the divorce rate as compared to 1960 is a good thing or a bad thing.  In every sermon I’ve heard or article I’ve read mentioning divorce statistics, it is presented as a very bad reflection on our society that the divorce rate has climbed so high as compared to prior decades.  Maybe they’re right; maybe it is a bad thing.  But then again, when I hear a 50% divorce rate quoted, I immediately wonder what is the rate of marriages that have become a covenant of bondage due to the repeated unrepentant abusive behavior of one partner against the other?  And how does that statistic compare to 1960?

We, as believers in Christ, need to be very clear on this point.  God is opposed to allowing the continuance of relationships that have become abusive bondage.  Abusive covenants of bondage do not glorify God.  Just dissolution of an abusive covenant of bondage does glorify God.  It is for this reason that God redeemed Israel from Egypt, and it is for this reason that He redeemed us from the kingdom of darkness.

We, as the body of Christ, should be a lot less concerned about the number of divorces, and a lot more concerned about how well covenants are honored while they do endure.  There is a lot more to honoring a marriage covenant than just sticking it out and refusing to request a divorce.

You want to hear a relevant marriage statistic?  Here’s one for you. 100% of all marriages end.  Every single one of them dissolves before entering the next life.  According to the words of Jesus, in Matthew 22:30 (and Mark 12:25) not one single human marriage will continue into the next life.  Only one Christian covenant is eternal, and that is our covenant with God through Jesus Christ!

What do you think of statistics and simplistic clichés used in sermons?  Do you find them annoying and unproductive?  Or do you see a benefit in them that I am missing?