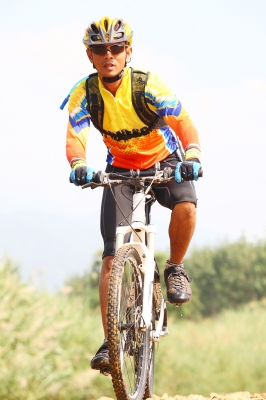 Sweat poured down my face and every muscle quivered with exhaustion as I strained to push the bicycle pedal down one more time…then shifted to push the other pedal down yet again.  Twenty miles into a 26 mile mountain bike trek I reached the limit of my endurance, as I struggled up an incredibly steep and narrow mountain trail.

My speed had slowed to a crawl, using all my waning strength to barely force the tires to inch out one more revolution up the mountain.  With too little speed to maintain balance, I fell to the ground in an attempt to swerve around a rock in the middle of the path.

From the top of the ridge, my friend Joey called down, “How are you coming?” as he waited for me to catch up.  I struggled to my feet, dragged the bike upright, and began walking it up the trail.  I discovered, with relief, that I could walk both faster and easier than I could ride the bike.  After a few more steps, I began to wish I hadn’t even brought a bike.  The bike was dead weight, and riding the bike was worse than dead weight.  I could have hiked the trail much faster and easier than riding it!

It wasn’t an issue of training.  In 2002, I was training for a half-marathon, and was in as good a physical condition as I’ve ever been.  I was fit, trim, and conditioned to long strenuous exercise in hot humid conditions.

I had done a few bicycle rides with Joey, on highways near home, and had pretty well held my own in keeping up.  So when Joey invited me on a mountain bike trek and explained that it was less than half of a “real” mountain bike ride, I felt pretty confident that I could handle it.

So why, three-quarters through the ride, was I struggling in complete exhaustion to climb a steep grade while Joey cheerfully rested at the top?

It was a difference of equipment.  Joey had recently purchased a nice light-weight high-strength professional-level mountain bike complete with clip-on shoes that enabled him to pull as well as push.

In comparison, my bicycle was basically a cheap street bike with the addition of front shock absorbers.  My bicycle weighed at least ten times as much as Joey’s bike, was driven by push-pedalling alone, and had less gear-ratio advantage.

Joey’s bicycle was an engineering masterpiece especially designed for assisting the rider in climbing steep grades on rough narrow trails.  On those same trails, my bicycle was just additional dead weight to slow me down.

I did finish the trail, but I also learned the equipment I was relying on for help was more liability than assistance.  Rather than helping me achieve the goal, the heavy bicycle had become an additional burden, making a difficult task nearly impossible to achieve.

Is this what Jesus was talking about when He spoke of weariness and heavy burdens?

“Come to Me, all who are weary and heavy-laden, and I will give you rest. Take My yoke upon you and  learn from Me, for I am gentle and humble in heart, and you will find rest for your souls. For My yoke is easy and My burden is light.” (Matthew 11:28-30)

Speaking to people living in an agrarian society, Jesus used examples familiar to them.  A yoke and harness was a tool intended to aid an ox in pulling a load.  However, a poorly made yoke was too heavy.  Rather than aiding the ox, a heavy yoke became an additional burden, causing a difficult task to become nearly impossible to achieve.

A well designed yoke, like a well designed mountain bike, is strong and light-weight, with no excess material.  It allows the ox to efficiently achieve the goal of transporting the load, without adding unnecessary weight to the burden.

A faith system based on striving to keep inflexible legalistic rules in an effort to please an angry God is like a poorly designed mountain bike.  It simply increases the burden of the weary traveler, rather than aiding in achieving the goal.

Jesus offered to replace that burdensome legalistic system with a strong, light-weight, effective system…if we will come to Him and enter His rest.

Have you ever struggled under the heavy burden of legalistic rules, trying to please a God who seems to demand the impossible?