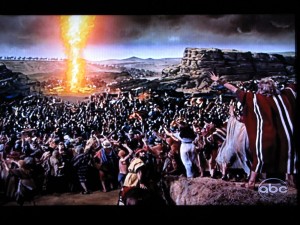 Image from ABC presentation of The Ten Commandments

Say, therefore, to the sons of Israel, ‘I am the Lord, and I will bring you out from under the burdens of the Egyptians, and I will deliver you from their bondage. I will also redeem you with an outstretched arm and with great judgments. (Exodus 6:6)

God told Moses He would do two things in regard to Israel’s bondage in Egypt.  He promised to deliver them and to redeem them.  These two separate actions are often paired in scripture.  In modern English we often use these terms as though they were synonymous, but in scripture they have two very distinct meanings.

Redeem relates to covenant law and legal claim.  When God redeemed Israel from Egypt, He brought about the just dissolution of Joseph’s covenant with Pharaoh…the inherited covenant that had become slavery under the abusive rule of the new king.  As a result of God’s redemption, Israel left Egypt with no covenant obligations, legal responsibilities nor allegiances to Pharaoh.

Deliver relates to all the other aspects of leaving Egypt…everything except the just dissolution of legal ties through redemption.

This third definition seems to give the most complete biblical use of deliver.  The picture of giving birth includes both ‘to set free’ from the restriction of the womb and ‘to take and hand over to’ the mother.  It also clearly illustrates the picture of a completely new life free of the restrictions of the previous life.

Upon their exodus from Egypt, Israel was birthed as a nation.  In fact, the Bible makes frequent references to this event in terms of a birth.

It’s important, though, to recognize that the delivery is a process with multiple stages.  Where the redemption was a one-time event that dealt with legal rights and legal liberty once and for all, the delivery process was lived out across a much longer time frame.

There was, of course, the initial departure from Egypt, followed a few days later by the confrontation and vindication at the crossing of the Red Sea.  These were the days of the initial physical deliverance from Egypt.

However, the Israelites had a much deeper tie to Pharaoh…emotional dependence and spiritual bondage.  They had lived for generations relying on Pharaoh’s protection and provision.  Upon finding themselves in the wilderness, they soon began worrying, complaining, and looking back on their years in Egypt with longing…longing for Pharaoh’s provision and protection…forgetting that Pharaoh had also enslaved them and murdered their sons.

When the time arrived to enter the Promised Land, they cried out in fear.  Without the protection of Pharaoh’s armies, taking possession of Canaan seemed an impossible task.  They were so reliant on Pharaoh they didn’t know how to function without him…much less how to trust a God they couldn’t see.

The Israelites didn’t even realize they needed deliverance from these emotional ties, spiritual bondage and false perceptions.  None of us can recognize our own need to be freed from misperceptions until after freedom has already begun…until after the perspective has been corrected enough to see the previous error.  We cannot see that our thinking was previously wrong until after it has begun to be right.  It’s a process that takes time.

So God graciously gave them 40 years…a generation…a lifetime…to be delivered from their emotional reliance on Pharaoh and the false idolatry of Egypt.  They were eventually fully delivered out of Egypt into the Promised Land.  Deliverance was a process with multiple stages, and God was faithful to complete the delivery.

Similarly, Christ has redeemed us from Adam’s covenant with the kingdom of darkness.  Once we add our yes and amen to the work He has already accomplished on our behalf, the legal aspect is dealt with, once and for all.  The delivery, however, is a life-long process requiring multiple stages of deliverance from wrong thinking and wrong perceptions of God.  As we learn to know His heart, we leave behind legalistic doctrines, growing in His grace and putting on His righteousness.

For He rescued us from the domain of darkness, and transferred us to the kingdom of His beloved Son, in whom we have redemption, the forgiveness of sins(deliverance from sin). (Colossians 1:13-14 – parenthetical clause added)

Just as in these two great biblical examples, God also intervenes to rescue His children from abuse.  Our initial focus tends to be on the legal aspect…the just dissolution of covenant ties…God’s redemption…the divorce.

Redemption, as used in scripture, means to justly bring about the end of a covenant of bondage by which someone (or something) belonging to God is being held captive.  Redemption justly dissolves the legal covenant once and for all, through divorce.

Deliverance, though, is a process with multiple stages lived out across a much longer time frame.  The delivery process begins before the divorce, as the Holy Spirit first begins to reveal the mistreatment as abuse and intentional malevolent manipulation.  It is during this time that we first begin to recognize the abuser’s manipulative lies and learn to cling tenaciously to the truth.

Deliverance continues through the divorce, as the Holy Spirit brings insight of God’s heart of love triumphing over the false doctrines of legalism and relational idolatry…as we learn to let go of old familiar myths and cling to new revelations of Christ’s heart of love and redemption.

And the delivery process continues long after the divorce, as false friends show their true colors, as false doctrines are recognized and toxic relationships are left behind…as we learn to walk in liberty, trusting the love, protection, provision, and faithfulness of our invisible God…without the need for approval or understanding of former friends or church leaders.

In whatever stage of delivery you may be, from whatever situation God is delivering you, trust Jesus.  He is our faithful Redeemer and Deliverer!

Deliverance is a long process…with many losses to grieve along the way…yet the loss is of little worth in comparison to what is gained.  And God, who redeemed us, is faithful to complete our delivery out of bondage into liberty in Christ.

“Do not fear, for I have redeemed you;
I have called you by name; you are Mine!
When you pass through the waters, I will be with you;
And through the rivers, they will not overflow you.
When you walk through the fire, you will not be scorched,
Nor will the flame burn you.
For I am the Lord your God,
The Holy One of Israel, your Savior…” (Isaiah 43:1b-3a)

From what circumstances is God delivering you?