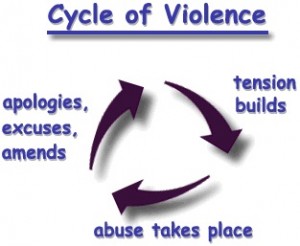 Overall, these are good things…very good things!  Domestic abuse is far too often overlooked, neglected, minimized, and even denied.

Yet, this renewed public emphasis also brings fresh questions…questions with no clearcut answers.  And I’d like to hear from those of you who have dealt with abuse…either personally or professionally…either as a target of abuse or as an advocate for those who have been abused.

One concern is use of the term domestic violence coupled with emphasis on high-profile physical abuse cases.  While I’m glad we’re not missing the opportunity to focus on this important area and to lobby for changes in policy, I’m also concerned we may be focusing too much on the extremes.

In most domestic abuse cases, the abuse target is slow to define the treatment as abusive.  There is some level of denial involved…an unwillingness to believe that the object of their love who has sworn sacred vows to love, honor, cherish and protect, could truly be so calloused as to intentionally inflict harm.  And the abuser plays on this doubt…playing mind games and offering false apologies and lavish gifts…all for the purpose of both maintaining control and planting self-doubt and confusion in the target’s mind.

I don’t have a solution for this…but it’s a concern.  What do you think?

Then, there’s the renewed emphasis on male accountability…to see abuse not as something to be addressed by the target but by the abuser.  Some advocates are challenging us to stop asking “Why did she stay?” (which is seen as another form of victim blaming) and instead ask “Why does he believe it is okay for him to abuse her?” (which appropriately assigns responsibility to the abuser).

I absolutely do not want to add to the heavy burden of shame or blame that an abuse target likely already bears…and is working toward shedding!  And, yes, I understand how easily questions can be asked in a pointed blaming manner, as though a target of abuse is at fault for their own abuse…and all too often this does happen.

And yet, if we zoom in from the big picture of the need for societal change to focus on the individual…the reality is that abusers rarely change…and there will always be abusers.  If our only solution is to change the mindset of the abuser, that’s not a solution that really helps the individual abuse target.  Moreover, it keeps the abuser in the driver’s seat…which is exactly where he wants to be…all progress hinges on his willingness to change…which he is incredibly skilled at faking yet completely unwilling to do.

Yes, from a broader societal long-term planning standpoint, these are worthy goals.  But what the abuse target needs, right now, is some way to regain control of their life…to stop the abuse.  And more often than not, the only way to stop the abuse is to leave the relationship.

When an abuse target begins to recognize the abuse for what it is and to take steps to leave, it is incredibly powerful.  They are no longer at the abuser’s mercy, trapped in the abuser’s mind games.  They are able to make their own choices and act on those choices.  They cease to be a victim and become a survivor.

So, exploring why people don’t leave sooner is important. We need to help overcome the obstacles keeping people in abusive relationships.

One blogger friend recently challenged her readers with the question “Why did you stay?” asserting there is no question more critical to helping people escape abusive relationships.

What do you think?  Is the question “Why did you stay?” a powerful tool for helping others escape abusive relationships?  Or is it yet another form of victim blaming?  Or does it depend on the context in which the question is asked?

Another concern with the renewed focus on male accountability is the specific focus on female abuse by male abusers.  Yes, I understand the overwhelming statistics of male aggression in domestic violence cases.  Yes, I also understand how often the issue of male abuse by female abusers is used by male abusers to deflect blame and redirect attention.  I absolutely get the important need to educate and teach men that real manhood does not include arrogant macho agressiveness…that Jesus Christ and His humility are the true model of true manhood.

Yet, it is also important to not overlook the substantial numbers of men who are abused by their wives.  This topic is especially close to my heart, because in a prior marriage, I was one of those abused men.  I understand the sense of shame and embarrassment in admitting to being an abused husband.  I understand how both the church and society at large tend to instinctively ignore abused husbands, believing the solution is to simply ‘man-up.’

While I love the renewed focus on male accountability, I am concerned that it leaves out a large sector of abused men in need of help and encouragement.

Again, I have no easy answers…but would like to know…what do you think?

I’m excited about recent positive changes, but are we unintentionally neglecting other important areas of abuse?