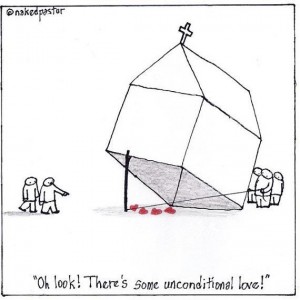 This term unconditional is sometimes used as a source of comfort regarding our relationship with God.

But…is unconditional really a good word to describe our relationship with God?  Or with each other?

But is unconditional really a good choice of words?  Does this word adequately describe our relationship with God?

Let’s start by looking at one of the best-known Bible verses, John 3:16:

“For God so loved the world, that He gave His only begotten Son, that whoever believes in Him shall not perish, but have eternal life.”

“God so loved the world…” that’s pretty broad. The word world implies a comprehensive global application.  Based on this clause, we can conclude that there is no human whom God has not loved enough for Christ to have died for their sins.

“He who believes in Him is not judged; he who does not believe has been judged already, because he has not believed in the name of the only begotten Son of God.” (John 3:18)

So, while God’s love may extend to all, relationship with God is not unconditional…nor is salvation through Christ unconditional.

In that same chapter, John records:

“He who believes in the Son has eternal life; but he who does not obey the Son will not see life, but the wrath of God abides on him.” (John 3:36)

So, we see that the word believe, as used in scripture, is inextricably linked to the word obey.  This same theme, this linking of believe and obey, is repeated throughout scripture.

We could get into all sorts of deep theological debates about what, exactly, that means and how that connection is made.  We could discuss Ephesians 2:8-9 along with James 2:14-26.  We could discuss multiple facets and perceptions of both the all-sufficiency of grace and the necessity of obedience.  Yet, at the end of all those discussions and potential disagreements, we would still be left with the inevitable truth that somehow, someway, the scriptural use of the word believe is consistently inextricably linked with the word obey.  From a scriptural perspective, in our relationship with God, we cannot have one without the other.

So…is unconditional really a good word to use in describing our relationship with God?  Does it accurately describe the relationship?  Isn’t it a little misleading?

Again, I must point out that these are extrabiblical terms applied by some scholars. Nowhere in scripture do we find these terms unconditional or unilateral used.

Personally, I see no basis for the concept of an unconditional covenant.  Rather, I see covenants (or a covenant…the New Covenant) between God and man for which man’s covenant terms and conditions are fulfilled by Jesus Christ, on our behalf, so that we might have relationship with God through faith in Christ.

I gave one illustration of this in my last post, using the example of the covenant between God and Abraham described in Genesis 15…which happens to be a primary example used by some as an illustration of an unconditional covenant.  Not everyone sees this the same as me, and not everyone would agree with my interpretation.  Some would say that since Abraham did not participate in the covenant ceremony described in Genesis 15 that there are no covenant terms or conditions applied to Abraham.

So, let’s review the conversation between Abraham and God, which led to the cutting of this covenant:

Abram said, “O Lord God, what will You give me, since I am childless, and the heir of my house is Eliezer of Damascus?” And Abram said, “Since You have given no offspring to me, one born in my house is my heir.” Then behold, the word of the Lord came to him, saying, “This man will not be your heir; but one who will come forth from your own body, he shall be your heir.” And He took him outside and said, “Now look toward the heavens, and count the stars, if you are able to count them.” And He said to him, “So shall your descendants be.” Then he believed in the Lord; and He reckoned it to him as righteousness. And He said to him, “I am the Lord who brought you out of Ur of the Chaldeans, to give you this land to possess it.” He said, “O Lord God, how may I know that I will possess it?” So He said to him, “Bring Me a three year old heifer, and a three year old female goat, and a three year old ram, and a turtledove, and a young pigeon.” Then he brought all these to Him and cut them in two, and laid each half opposite the other; but he did not cut the birds. The birds of prey came down upon the carcasses, and Abram drove them away. (Genesis 15:2-11  Emphasis added)

Even so Abraham believed God, and it was reckoned to him as righteousness.  Therefore, be sure that it is those who are of faith who are sons of Abraham.  The Scripture, foreseeing that God would justify the Gentiles by faith, preached the gospel beforehand to Abraham, saying, “All the nations will be blessed in you.”  So then those who are of faith are blessed with Abraham, the believer. (Galatians 3:6-9)

Both our relationship with God and our becoming heirs of God’s covenant promises is conditional upon our believing.

Or so it seems to me, based on my studies and my experiences…