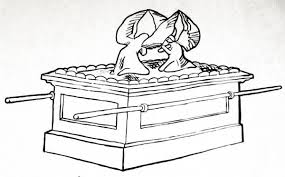 The ark of the covenant of the Lord

What’s wrong with this picture? A lot!  Everything from blaming God for their defeat in battle to presuming the ark would deliver them…and a lot of other things besides…

Let’s talk about those other things…let’s dig down to the fundamental issues…the unspoken lies and assumptions they incorrectly assumed to be true.

Let’s start with the Ark, itself. They correctly called it the ark of the covenant of the Lord.  The key word is covenant.  The Ark was the token of the covenant between Israel and God.  To relate this to our modern western culture, the Ark was the wedding band given to them by God when they took their sacred vows.

On top of the Ark was the Mercy Seat overshadowed by the wings of the golden cherubim. When the high priest made the annual sacrifice for his sins and the sins of the people, he sprinkled sacrificial blood on the Mercy Seat.  It was here that God’s mercy was sought for any unintentional violations of the covenant vows.  And it was above the Mercy Seat that God’s holy visible presence was seen in a cloud above the tabernacle and from which the brightness of God’s glory shone, filling the tabernacle.

The Ark was the token of the covenant through which God dwelt among His people. Only through covenant could holy God live among sinful people without their being consumed.

When the Israelites brought the Ark into their battle camp, they were seeking the protection of God’s covenant.  They were calling on God to honor His covenant vows by providing protection and victory in battle.

This time, though, the battle was lost and the ark of the covenant of the Lord was taken captive by the Philistines. So, why did God not protect them and give them victory?

The sons of Eli, Hophni and Phinehas, were abusers. They arrogantly and unrepentantly violated the covenant terms…the sacred vows…the commandments.  They abused their power as priests.  They abused the worshippers.  They stole select portions of God’s sacrifices.  They sexually abused the women who served at the entrance to the tabernacle.

Then they brought the ark of the covenant of the Lord into the battle camp. Do you see what they were doing?  They were relying on God’s protection under the very covenant they had repeatedly violated!

Even in retrieving the Ark from the tabernacle, they violated the covenant. The Ark resided in the Holy of Holies where only the High Priest was permitted to enter, only once a year, and only accompanied by the blood of the sacrifice.  Yet these two presumptuous abusers barged into the Holy of Holies to carry the Ark out to the battlefield.

Rather, they arrogantly presumed. The sense of entitlement displayed is astoundingly atrocious.  It seems they were trying to force God’s hand…trying to manipulate Him into protecting them, “Let’s bring the ark of the covenant of the Lord into battle.  Then God will have to give us victory.  Otherwise the Ark will be captured or destroyed and surely God won’t let that happen!”

But God did let it happen. The Israelites suffered a crushing defeat.  The sons of Eli were killed in battle and the Ark of the Covenant was captured by the Philistines.

Upon hearing the horrible news, old Eli died and Phinehas’ pregnant wife went into labor…with her dying words she gave Eli’s newborn grandson the name Ichabod, saying, “The glory has departed from Israel.” She understood that, with the capture of the Ark, God’s presence was removed from Israel.

The sons of Eli mistakenly presumed they were entitled to covenant protection despite their repeated violations of the covenant vows.

That is so typical of abusers!

How many times, today, do abusers claim covenant protection despite having egregiously violated their sacred trust?  They act as though they are entitled to claim the promises of the very covenant they have broken.

How many abusive spouses claim the privileges of the marriage covenant despite their treacherous violations of the sacred vows to love, honor, cherish and protect?

How many pastors, priests, and evangelists claim the right of covenant mercy and restoration as leaders in the very church where they have egregiously violated the sacred trust by molesting children or sexually harassing worshippers?

One cannot break a covenant then claim protection under the very covenant they have broken!

The sons of Eli tried to do that. It cost them their lives.  It cost the nation of Israel the loss of God’s presence.

How many churches, today, have suffered loss of God’s presence because they are supporting an abuser’s false claim of entitlement to protection under the very covenant they have egregiously violated?