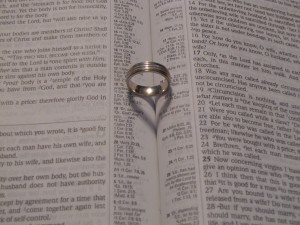 Frankly, I don’t like the term remarry.  Remarry implies one is entering into marriage again with someone to whom they were previously married.

When Sherri and I married, although we had each been previously married, we had not previously been married to each other.  Therefore, we did not remarry…we married.

However, in our society, remarry is frequently used to refer to a marriage in which one or both parties has previously been married to someone else.  So, for this post, I’m using the term in this context (though under objection). 😉

1 Corinthians 7:10-11 is sometimes quoted by those who hold a position that a believer who has experienced divorce is forbidden to ever remarry (or permitted to remarry only within very narrow legalistic rules contingent on either the death or prescribed level of sin by someone with whom they are no longer in relationship).

But to the married I give instructions, not I, but the Lord, that the wife should not leave her husband (but if she does leave, she must remain unmarried, or else be reconciled to her husband), and that the husband should not divorce his wife.

Lifted out of context, it is easy to see why some take this as an edict from the Apostle Paul that any believer who has experienced divorce is forbidden to ever remarry.  However, considered in context, it becomes clear that this is not the intended meaning at all.

To correctly understand this passage, first the entire chapter must be read in context, and second the contextual use of terms must be noted, throughout the passage.

Also, one must keep in mind that Paul was not married, and generally advised all unmarried people that it was better to remain unmarried, not as an edict, but as encouragement for those called to celibacy.

The word translated as unmarried (agamos) in verse 11 is the very same word used in verses 8-9:

But I say to the unmarried and to widows that it is good for them if they remain even as I. But if they do not have self-control, let them marry; for it is better to marry than to burn with passion.

The term unmarried may be used to refer to anyone who is not currently married.  However, Paul used distinctly different terms, in this passage, for a widowed person (chera) or a never-married person (parthenos).  Therefore, it should be understood that in his use of the word unmarried (agamos), Paul is specifically including people who have divorced.  This is made especially clear by Paul’s use of the word unmarried (agamos) in verse 11, where he is speaking specifically of a woman who has left her husband.

Given Paul’s advice in verses 8-9, we must conclude that his admonition in verses 10-11 is dealing with the circumstances and motive of divorce, rather than a life-long edict following divorce.  Here, Paul is telling the church that a believer should never divorce for the specific purpose or intent of marrying someone else.

This position is in keeping with the words of Christ in Matthew 19:3-12, where Jesus equates such behavior to adultery.  I have discussed this passage in Matthew in a previous post as well as in my book on the topic of God’s heart toward believers who have experienced divorce.

Just in case anyone should have misunderstood his intent in verses 10-11 as a prohibition against remarriage at any time after divorce, Paul restates his position in verses 26-28(a):

The wording here is so clear as to leave little room for doubt of Paul’s intent.  Due to present distress (whatever that might have been at the time) Paul advised each person to remain as they are, whether married or single.  However, speaking specifically of a person who has experienced divorce (released from a wife), Paul said that if they do marry it is not sin.

Are you released from a wife? Do not seek a wife. But if you marry, you have not sinned…

Paul’s clear intent is to allow the freedom to marry, for anyone who is unmarried, whether previously-divorced, widowed, or never-married.  Paul treats all unmarried persons the same, regardless of circumstances.  For all unmarried persons, Paul advises caution in regard to marriage, but clearly states that marriage is not sin, and that marriage is preferable to undue lust or temptation.

If you would like further reading on this topic, Divorce and Remarriage, A Redemptive Theology, by Rubel Shelly, is an excellent resource.