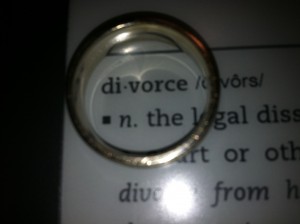 This is a repost (with minor editing) of my article previously posted on Crying Out for Justice on April 4, 2012.

“Divorce is sin…  God hates divorce…”  Most of us have heard this mantra so many times, that we’ve come to simply accept it as truth, without further scrutiny.

I have read the statement, “Divorce is sin,” in many books, by well-known Christian authors, written specifically for people who have experienced divorce.

Says who?  Who says that divorce is sin?

The Bible never labels divorce as sin, nor does it contain any commandments prohibiting a just divorce.

On the contrary, the law given to Moses not only makes specific provision for divorce, but also ensures that the divorce is to be handled in a manner that is just, that neither party remains under obligation to the other, and each is free to marry another (Deuteronomy 24:1-4).

Where, in all of scripture, has God ever said that sin is permissible?  If God said that divorce is permissible, and even gave instruction on how to go about it in a godly manner, then it is not sin!  Why then, under Grace, would we presume to impose legalistic rules that are more restrictive than the Old Testament Law?

Many people claim that Jesus, in Matthew 19:3-9, denounced divorce, thereby over-riding the law given to Moses.

On the contrary, not once in this passage did Jesus say that divorce is sin, nor that the law given to Moses was erroneous in permitting divorce.  Jesus, in fact, defended the law given to Moses, stating that it was necessary to make provision for divorce because of hardened hearts…the heart of one partner being hardened against their spouse in unrepentant violation of their marriage vows.  In fact, Jesus included a specific example (immorality) when divorce is not only acceptable but expected.

Then Jesus addressed the heart of the question presented, by explaining that if a man chooses to commit adultery against his wife, he cannot escape guilt for his transgression by using divorce as a legalistic loophole.  If a man divorces his wife for the specific purpose of marrying another woman, that is still a betrayal of the marriage vows.

Sin against a covenant partner is sin, whether or not it includes divorce.  The sin is not the divorce, but rather the violation of sacred covenant vows.

So, when I say that just divorce is not sin, am I saying it is okay to not take covenant vows very seriously?  That it is okay to just get a divorce for any frivolous reason?

Not at all!  On the contrary, sacred covenant vows should be taken very seriously!  In fact, part of the problem is that we don’t take the covenant vows seriously enough.

Our preoccupation with divorce (as a result of erroneously labeling divorce as sin) rather than elevating the sacredness of the covenant vows, actually diminishes them, by incorrectly placing the scrutiny on the longevity of the covenant, rather than on how well the covenant vows are lived out.  The question, in searching our hearts for sin, should not be, “Have I divorced?” but rather, “How well have I honored my covenant vows?”

This erroneous labeling of divorce as sin leads to all sorts of theological error.  Since the Bible very clearly makes allowance for divorce, adherents to the myth that “divorce is sin” are forced to then state, “Divorce is only permissible when…”  While the rules for the “exception clause” vary widely, without some sort of “exception clause” one cannot claim that “divorce is sin” without directly contradicting both the words of Christ and the Old Testament Law.

Now think about how contradictory these two statements are.  “Divorce is sin.”  “Divorce is only permissible when…”

Again, we see that the sin is not the divorce, but rather the intentional violation of sacred covenant vows.

Now, let’s look at another theological error related to this biblically unsubstantiated myth that “divorce is sin.”  The concept of redemption is fundamental to the Christian faith.  All Christians agree that Jesus Christ came to redeem us from the kingdom of darkness.

Yet, because of our erroneous view of divorce as inherently sinful, we seem to have forgotten what redemption is.  What exactly do we think Jesus did when He redeemed us?  He brought about the just dissolution of Adam’s covenant of bondage to the kingdom of darkness.

Jesus brought about our just divorce from the kingdom of darkness, and He calls it Redemption!

When Pharaoh chose to “drive them out of his land” Israel was released from their covenant obligation to Pharaoh. At that moment, Israel was divorced from Egypt. The covenant was dissolved, and Israel was free to proceed to the Promised Land with no obligation of allegiance to Egypt.

God brought about the just divorce of Israel from Egypt, and He calls it Redemption.

Redemption is just divorce from a covenant of abusive bondage!

Thank God, He is still in the business of redeeming His children from covenants of abusive bondage!