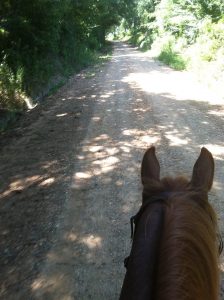 That nagging worry at the back of my mind found fulfillment. My worst fear became reality.

…and it was okay…

I’ve been riding Knockout over a year, now. Sometimes I’m able to ride as often as three or four times in one week.  Other times I go as long as three weeks between rides.  I figure I’ve averaged about one ride per week…which means I have about 60 rides on him

We have made amazing progress in 60 rides!

Knockout has matured from a green-broke, frightened, spooky, flighty colt to a pretty reliable young horse.

The first time I rode Knockout I was scared. Cancer treatment was quite an ordeal, and to be honest I was feeling pretty fragile.  I didn’t trust my own lack of strength or my ability to recuperate.  But I was determined to ride him.  So, I thoroughly disked the arena to a nice smooth carpet of thick soft dirt, and climbed in the saddle.

That first ride started out pleasant enough. We walked around the arena both directions a few times with no mishaps.  I asked for a trot and Knockout sprang into a gallop.  Startled, I pulled back…and Knockout promptly bucked me off.

I stood up, dusted myself off, realized I wasn’t hurt…smiled…and remounted.

That buck-off was the best thing for my confidence. It showed me I wasn’t as fragile as I’d come to believe.  I could still take a fall from 15 hands into soft arena dirt without doing any damage.

Knockout and I have done around 60 rides since then. We’ve come a long way in learning to relax under saddle.  We’ve done a lot of work on transitions from walking to trotting to loping to stopping to backing…and every combination thereof.  And we’ve developed a relationship based on clear communication, mutual respect, and mutual trust.

There’s a limit to that trust, though. Knockout is still a prey animal and prey animals are prone to flight.  That first ride was not his last time to bolt or buck…nor was it my last time to panic and mishandle a situation.  We’ve had several opportunities to practice the one-rein stop.  We’ve also had plenty of opportunities for me to practice relaxing and going with him when he startles.

The startles are now much less frequent. They’re much more controlled when they do happen.  And I respond much more calmly than I did previously.

Yet, I’ve still retained this nagging concern at the back of my consciousness. What if Knockout bolts in thick woods?  How would we deal with an all-out runaway situation through thick trees and low-hanging branches?

It’s not a pretty picture…and no matter how much I tried to plan for it I had trouble envisioning a happy ending to that particular scenario. Out in the open, I have time to respond and room to maneuver.  I have options like turning a big circle or performing a one-reined stop.  On a narrow trail through thick forest, there is neither room nor time for any of that.

So I dealt with it the best I could…by trying to minimize the risk of it happening. Riding the gravel roads, we practiced transitions over and over, going from a walk to a canter…from a canter to a full stop with backing…from backing straight back to a canter.  We practiced over and over, building muscle memory…building confidence…so we were both more comfortable with speed and with sudden application of the bit at speed.

Yet the nagging doubt at the fringe of my consciousness still nagged…because I knew practice while we’re both relaxed and focused is not the same thing as a real life bolt on a terrified horse who believes he is fleeing for his life.

Yesterday morning we had a really nice ride down the gravel roads. Knockout wanted to turn up a trail running through a pine thicket and I decided to go with him.  We rode about a quarter mile or so down the trail and all was good until we came to a place where the trail runs between two large oak trees with low hanging branches covered in dense foliage.

I reached my right hand out to move a branch aside and Knockout startled at the sudden movement of the leaf-laden branch. Normally, this would not be a big deal…normally I would lightly check him and that would be the end of it.  This time, though, Knockout’s startle carried us deeper into the thick foliage, moving and rustling the entire branch.  To Knockout, it must have seemed as if the whole forest had suddenly lunged toward him in an attack.  My light check was ignored and Knockout plunged forward…crashing us both thru the pair of low-hanging heavily-leaved oak branches…with lots of added movement and added rustling.

As Knockout leaped into a run, I thought, “This is it! This is that runaway ride on a terrified horse through dense forest!”

My next thought was, “Keep your seat! Keep your seat, stay calm, and ride it!”  Which was followed by, “We really need to stop!  Now!”

Firmly grasping the reins in both hands, I took a deep seat in the saddle and pulled back to ask for an immediate stop, “Whoa!”

For a split second, Knockout sat back on his hindquarters. For just a split second, he responded to my cue to stop.  But in that split second I felt his energy gathering for another leap forward.  Experience told me that next leap would either be a terrified bolt through the bit or a bucking fit to escape the pressure of the bit from the front combined with that terrifying ‘predator’ chasing from behind.  In that split second, I realized Knockout was trapped between a rock and a hard place with adrenaline-fueled energy that was going to release somewhere.

In that split second, I dropped all pressure from the bit and gave Knockout plenty of slack in the reins.

Knockout leaped forward again…as he landed and brought his hind hooves under himself, I took another deep seat in the saddle, leaned back, and drew the reins in, “Whoa!”

Again, Knockout sat back on his hind quarters. Again I released pressure, putting plenty of slack in the reins.

And we walked off.

That was it. Three leaps…two whoas…and it was over.  The catastrophe was averted and we were once again calmly walking down the path through the pine thicket.

I smiled, leaned forward, petted Knockout’s neck and told him what a brave horse he is for trusting me enough to follow my direction even when he is terrified.

As we continued the ride home, my smile grew as I realized my worst fear had become reality…and together we had handled it just fine.

Yesterday, my confidence grew just a bit. I believe Knockout’s confidence also grew.  We were both scared, yet we both chose to listen to each other and to trust each other…and we learned that together we can handle tense situations just fine.

Sometimes, we have to experience our worst fear becoming reality in order to take the next step in building confidence.

Sometimes, we have to experience our worst fear becoming reality to take the next step in building confidence. Click To Tweet

And you know what? Through every one of those situations, God has proven Himself faithful.  He has been my constant friend and companion thru every difficulty.  Through those difficulties, my faith in Him has grown and our relationship has deepened.

When our worst fears become reality is when the relationship is given a chance to be tested and proven.

How about you? In what areas has your confidence grown through seeing your fears become reality? 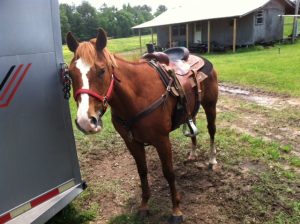