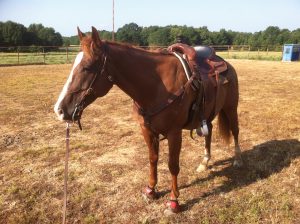 I woke early, had a cup of coffee, and headed out to saddle a horse. I had at least a couple of hours before the rest of the family awoke and intended to fully enjoy the morning.

I wanted to ride the woods trails this morning. I’ve avoided the woods the past couple of months, opting instead for arena or gravel roads.  The woods oppressively confine the suffocating heat and stifling humidity, creating an environment rich in biting insects.  This morning’s low temperatures and light breezes carried hope of an enjoyable woods trail ride.

I brought Knockout (our six year old AQHA gelding) up for grooming. I was pleased to see the scrape on his side has healed.  It was just a minor scrape such as horses acquire while running the pasture with other horses.  However, knowing the rub of a saddle pad can interfere with healing of wounds I had refrained from riding him the past week.

Saddling up, it crossed my mind to wonder if we’d have any issues on this ride. Young horse…cool morning…hasn’t been ridden in over a week…taking him to an area he hasn’t been in a few months…thru trails likely overgrown during the summer…a recipe for disaster?  Just as quickly, I put the concerns aside.  Knockout was calm and my confidence in him has grown as I’ve worked with him the last few months.

I mounted, petted him a couple of times, then barely lifted the reins. Knockout eased forward and I just moved with him as he slow-walked down one side of the arena.

As we passed the pasture gate he turned his head right and acted like he wanted to go out. I lightly twitched the left rein and gently rubbed my left calf against his flank.  His attention returned to me and we continued around the arena.  “Good,” I thought, “he wants to go out in the pasture, which is where I already planned to go.”

I pushed Knockout into a trot. As we circled the arena to approach the pasture gate again I slowed my movement and he dropped to a walk.  When we reached the gate, I leaned back and he stopped.  I untied the gate, grasped it in my right hand, lifted my left stirrup away and pressed my right calf near the girth.  He responded with a left counter-arc step…another ask and another step…then a third.  Now the gate was open enough to walk thru.  I cued a left hindquarter turn and Knockout responded by swinging his hindquarters around 180 degrees so we could pass thru the gate as my right hand slid along the top gate rail.  Once Knockout’s tail cleared the gate post, we side-passed left to close the gate.  Easy-peasy…  😉

As I turned and looked down pasture, Knockout moved with me, walking easy in the direction I faced. Knockout started drifting right a bit, headed toward a different route than I had in mind, “Hey, Joe, let’s go this way.”  I moved my left stirrup away, “I’d rather go left, Knockout,” and he came back to center.

Next step, Knockout eased right again. Again, I brought him to center with a lifted left stirrup.  As he started to step right again, I gently brushed his right shoulder with my right calf, “No, really, Knockout, I want to go left toward that tree I’m facing.”  Knockout proceeded on a straight line toward the tree while facing straight ahead, “Hey, Joe, I changed my mind.  I think this direction feels a little more comfortable.”

As we approached our usual creek crossing I noticed the sandy soil had eroded considerably in recent rains, leaving a fairly deep trench with steep sandy sides. Knockout walked to the creek, stopped, then turned his head to look back at me, “Are you sure this is safe?”

This time I agreed with his concern and looked right downstream, “You’re right, Knockout. That looks a little dangerous.  Why don’t you find a safer crossing for us?”  A few yards downstream we crossed at a wider place with no steep sides or deep trenches.

Coming out of the creek crossing, I looked toward a large oak tree at the back fence line and lightly squeezed my legs. Knockout responded with a long trot on a straight line.  Trotting thru the middle of the cattle herd, we both watched the cattle in our peripheral vision, without breaking stride or turning our heads.  We both stayed focused on each other and our ride.

Not far from the back fence line we turned thru an opening in the tree line to cross into the next pasture. What a surprise awaited there!  A huge flock of Canadian geese were scattered across the pasture.  As we trotted straight toward the middle of the flock, about a hundred geese took flight simultaneously.  It was quite a sight!  Yet we never broke stride or turned our heads.  We continued trotting straight toward the next tree I had picked as a direction marker.

Nearing the start of the woods trail, I slowed my movement and Knockout responded by dropping into a walk as we entered the woods. As expected, the trails had overgrown a bit, but we smoothly navigated between tall brush and overhanging branches with the lift of a stirrup here and a brush of a calf there.  Smooth…light…soft…easy…graceful.

It was truly an amazing ride!

On the one hand, no one thing was particularly spectacular. No one thing stood out as something we hadn’t practiced before.  Yet, it was amazing to experience it all coming together in a continuous flow through the entire ride.

I hardly ever moved my reins. I barely even moved my legs.  Yet we communicated beautifully.

Up until a few years ago, I had no idea it was even possible to steer a horse with anything other than the reins. I thought light horsemanship was neck reining instead of plow reining.  Even when I began to learn a little about the possibility of softer cues, I wasn’t very interested…it all sounded rather mystical.  I certainly never thought I could ride with such lightness!  And the idea of training a horse myself would never have even crossed my mind as a possibility.

Yet, here I am riding this amazing creature with incredible lightness! Yes, I realize the next ride will likely not be quite as smooth.  But I also realize there will be more rides that are as smooth.

So…why am I writing this post about a wonderful ride with my horse? Many of my friends and family who aren’t into horses won’t really understand why I would go on and on about how well my horse handles.  Many friends who are accomplished horsemen may think it’s pretty humorous I’m just now learning things they’ve known their whole life.  A few friends who are pursuing horsemanship may appreciate and relate to my experience.

But here’s the thing. The really crazy part of this whole adventure is that I shouldn’t be doing it to begin with…but I am…and I’m loving it!  🙂

February of 2016, I was at the low point in my cancer treatment. I had been diagnosed with cancer the previous December and undergone two surgeries.  Then spanning January to March, I went thru seven weeks of radiation treatment twice a day and chemo treatment once a week.  The surgery took a major nerve to my right shoulder, leaving me with limited movement of my right arm.

The end of January, during the middle of a chemo treatment, our horse trainer called to tell us the 4-yo colt we’d left with him for 60 days was not going to work out. He said the horse was “training resistant” and recommended selling him and buying a better prospect.

Sherri and I left from the chemo treatment and drove 3 hours to the trainer (without returning home in between) to pick up our colt. We got him home to discover he had been mishandled, was injured, and had become very frightened of men.

Now, think about that for a second.

I was no horseman by any measure. I was a poor rider with little experience and no skill.  I knew nothing about training horses.  I had never roped.  I had very limited motion in my right arm due to a surgically removed major nerve.  I was undergoing chemo and radiation.  I was very weak.  Most days it was all I could do to keep enough calories and fluids down to make it thru the day.

That’s pretty audacious! Why on earth would I say such a thing, much less work to follow thru on it?

Has God ever asked you to do something that just didn’t make any sense?

Do you remember the story of Naaman who came to the prophet Elisha asking to be healed of leprosy?  Elisha told him to go wash in the Jordan River seven times and he would be cured of the leprosy.

Yet, despite the instructions making no sense, Naaman followed God’s direction and washed in the Jordan River seven times…and was healed.

Here I am a year and half later.

I have decent mobility in my arm…which my physical therapist attributes directly to my determination and perseverance in working with that young colt…and to practicing roping.

I’m far from mastering horsemanship…but this young horse I’m working with has sure come along well.

We’re not roping calves or steers yet…but I regularly swing a rope from his back and push calves around the pen.

We’re still working on the fundamentals…but we’re getting pretty close to seeing all the pieces come together to try roping.

God sometimes asks us to do things that sound crazy…because all things are possible with God.

Along the way, I’ve found a lot of healing. The horsemanship and roping have aided both physical and emotional healing…for both Knockout and myself.

The master horsemen, Ray Hunt, Bill and Tom Dorrance, Buck Brannaman, all wrote about horsemanship as a lifestyle that affected every aspect of their lives. They believed it not only improved their relationship with the horse, but also their relationships with people.

I can see why…and am learning from them…

I still don’t know the full reason God asked me to do this. But I’ve already seen a huge return on the investment…and believe there is even more to come.

God still asks His people to do crazy things…and He still does the impossible.