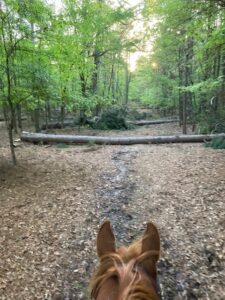 Do you see all those trees laying on the ground?

I realize most people looking at this photograph will just see a bunch of useless pine logs laying in a forest.  However, I see something entirely different.

I see stacks of 2×4 and 2×6 lumber cut in lengths varying from 8 feet long to 16 feet long, neatly stacked and bundled, fresh from the sawmill.

I know what size and length boards will go where in the barn structure.  I know how the ends of boards will be coped to fit the required joinery.  I know how many screws to put in each connection, and have already increased some board sizes to make room for enough screws.

I have detailed plans for those prostrate pine logs and, because I have plans, I have a vision.  Yes, I see the pine logs.  Nevertheless, I also see a new barn.

For I know the plans that I have for you,’ declares the Lord, ‘plans for prosperity and not for disaster, to give you a future and a hope. (Jeremiah 29:11) 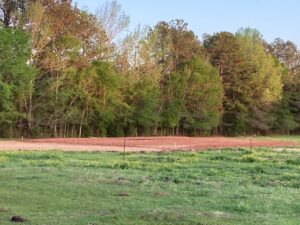 Do you see that dirt pad in our pasture?

I realize most people looking at this photograph will just see a pile of dirt and mud spread across the ground.  However, I see something entirely different.

Yes, I see the dirt pad in the middle of a pasture.

Nevertheless, I also see the site of our new barn.  I see the lumber (not yet milled) stacked neatly ready for construction.  I see the roof trusses being carefully assembled so they will all match and all fit.  I see the walls being framed and erected with concrete footings.  I see the fully framed structure standing tall and sturdy, well built and well braced.  I see the roof and wall cladding attached to close it in and keep the rain out.  I see a finished barn ready for hay to be stored, so our livestock will have food next winter.

The substance of things hoped for…

Those logs have substance… but they are not yet a barn.

That dirt pad has substance… but it does not yet have a barn standing on it.

The evidence of things not seen…

I cannot yet see that barn with my physical eyes.  It exists only in my mind… in my vision of faith and hope.  My plans stand as evidence.  Those pine logs are evidence.  That dirt pad is evidence.  I can point to that evidence and say, “See, this is how the barn will be built.  Here is where it will stand.  Here is the wood from which it will be constructed.  Here is a drawing of what it will look like.”

Faith, hope, and plans bring the vision to fruition.

Blessed be the God and Father of our Lord Jesus Christ, who has blessed us with every spiritual blessing in the heavenly places in Christ, just as He chose us in Him before the foundation of the world, that we would be holy and blameless before Him. In love He predestined us to adoption as sons and daughters through Jesus Christ to Himself, according to the good pleasure of His will, to the praise of the glory of His grace, with which He favored us in the Beloved. In Him we have redemption through His blood, the forgiveness of our wrongdoings, according to the riches of His grace which He lavished on us. In all wisdom and insight He made known to us the mystery of His will, according to His good pleasure which He set forth in Him, regarding His plan of the fullness of the times, to bring all things together in Christ, things in the heavens and things on the earth. In Him we also have obtained an inheritance, having been predestined according to the purpose of Him who works all things in accordance with the plan of His will, to the end that we who were the first to hope in the Christ would be to the praise of His glory. In Him, you also, after listening to the message of truth, the gospel of your salvation—having also believed, you were sealed in Him with the Holy Spirit of the promise, who is a first installment of our inheritance, in regard to the redemption of God’s own possession, to the praise of His glory. (Ephesians 1:3-14)

Wow!  Now that’s some plans!  Plans made by God before the foundation of the world… plans involving you and me… plans about our eternal destiny as children of God.

You may look at me and see a flawed man… a man with a lot of limitations… a man who struggles discerning the right thing to do… a man prone to selfishness and sin… a man with a lot of insecurities.  And you would be right… just as those pine logs are right now a bunch of trees laying prostrate in the forest.

Nevertheless, when God looks at me, He sees me blessed with every spiritual blessing… chosen in Him… holy and blameless… predestined as His son… beloved… redeemed… forgiven… royal heir… sealed with the Holy Spirit… to the praise of His glory!

God looks at you and me through eyes of faith… based on His plans… the substance of things hope for… the evidence of things not seen.

Lord, help me to see myself and others through your eyes of faith.