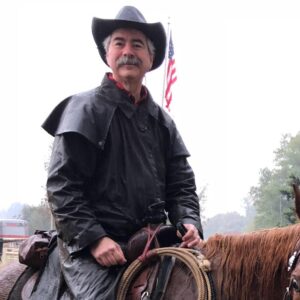 My Grandpa (Robert) Mitchell grew up on a ranch in south Arkansas, raising cattle and horses.  We heard a lot of stories of his youth… though not nearly as many as we would have liked to have heard.

When Grandpa was getting up in years and had suffered a couple of strokes, he sometimes got confused or had trouble remembering what word he wanted to use.  One day he walked over from his little house next to ours, acting very agitated.  “The water’s a rage’n and the horses are runn’n!” he exclaimed, repeatedly.  Further investigation revealed a water line had ruptured and was spraying water all over his kitchen.  In his excitement he communicated his need for help as effectively as he could.  We got the message!  🙂

I have often wondered what event from his boyhood was recalled in his excitement over the ruptured water line.  It sounds like it must have been a pretty exciting moment in his young life.

Yesterday morning, I heard the wind pick up and rain start to fall.  I stepped out on the front porch in time to see the horses run into their shed (aka The Equestrian Pavilion) ahead of a curtain of hard rain sweeping across the pasture.  I smiled watching them run for shelter, then stepped back inside my own nice, warm, dry, cozy house.

A few minutes later I glimpsed a horse’s rump round the barn… outside the fence.  Uh-oh!  😮

I hurried to the back door where I slid on mud boots, drovers coat, and oilskin hat before hurrying out to investigate.  All six front-pasture horses were wandering loose.  They had somehow opened the gate at the Equestrian Pavilion.

The freedom rush combined with the wind and the rain had them full of themselves… running around with heads high and tails lifted.

I grabbed a couple of flags and started trying to coral them back toward the pasture gate.  I got in a good position and applied some very gentle flag pressure.  They took off running straight for the gate and I smiled at how easy that was.

But then our stallion realized how close he was to the mare pasture, and it started falling apart.  Archie ran to the mares.  The others followed him before splitting up in different directions.

Realizing I would never get them to regroup and move together now, I put the flags back and grabbed a halter instead.  I haltered Archie and led him back.  Then I haltered Knockout, with Modelo following after, and got both of them back in the pasture.

By this time, the other three horses had run thru another fence into our cow pasture.  As my father-in-law started pulling fence back together, I haltered Buck and led him back where he belonged, before returning for Sonny and Cinch.

By this time Sonny and Cinch were running wild.  The wind was blowing the rain nearly horizontal as those two ran from one end of the cow pasture to the other and back again.  Each time I approached they just ran off.

Watching them run wild in the wind and the rain, I smiled as I recalled Grandpa’s words, “The water’s a rage’n and the horses are runn’n!”

Yes, Grandpa, they sure are.  The wind and water are sure rage’n and those horses are runn’n like crazy!  🙂

I stayed calm and spoke gently as I approached the horses in a corner of the pasture.  Cinch was the wildest, so I focused on Cinch.  I approached him casually, while positioning myself to head him off if he started to leave.  I petted his withers, and slipped the halter over his head.

Sonny was pretty easy to catch after that, and I put the last horses back in their pasture without any more issues.

Sometimes life is that way.  Sometimes we are caught in the storm.  The wind and water are a rage’n and all we want to do is run wild!

But the Master’s voice calms us.  We calm because He is calm… and because we know we can trust Him.  We look to the Master, and all of a sudden the raging storm doesn’t seem like such a big deal after all, as our spirit is flooded with His peace.

And there arose a great storm of wind, and the waves beat into the ship, so that it was now full. And he was in the hinder part of the ship, asleep on a pillow: and they awake him, and say unto him, Master, carest thou not that we perish? And he arose, and rebuked the wind, and said unto the sea, Peace, be still. And the wind ceased, and there was a great calm. (Mark 4:37-39)